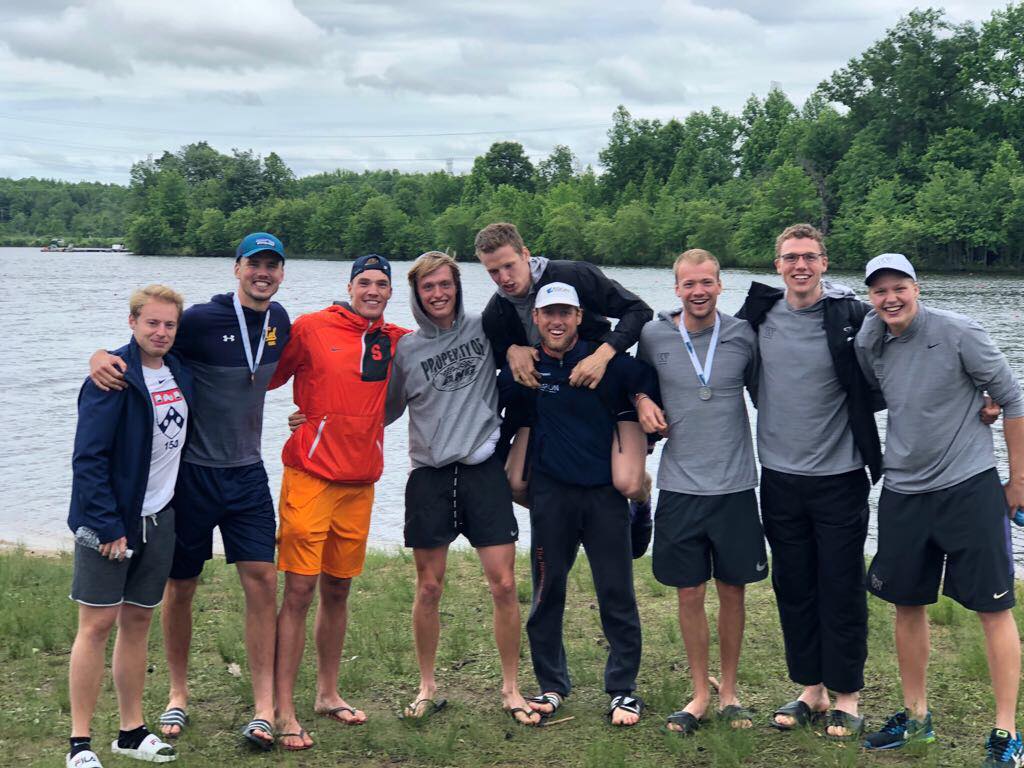 For some years there’s been a trend in Dutch rowing. Talented juniors are leaving to the United States to continue their rowing and studying there. Toprow spoke with three of them – all from different universities and different years. What attracts them, is there a difference in rowing culture and how do they combine University rowing with their ambitions to row for the Dutch Rowing Federation?

“I went to America for the experience. It was a big step to leave The Netherlands at such a young age and to build up a new life on the other side of the world”, says Maarten Hurkmans, who won a gold medal in the eight at the 2015 Junior World Championships in Rio de Janeiro. Then he went to the University of California. “That’s why I had my doubts. Niki van Sprang, a Dutch international and former rower of ‘Cal’, helped me a lot. He definitely gave me the last push.” Hurkmans says that an advantage of rowing is that you are part of a team, so getting to know people isn’t a problem. “I was placed in a house with some guys from the rowing team. I soon felt at home.”

Eastcoast – Westcoast
Gert Jan van Doorn, who was scouted by Cal’s biggest opponent at the Westcoast, the University of Washington, tells a similar story. “It is a combination of their interest in your rowing capabilities and the impression they make. I first went for a weekend to see what it was like. The sky is the limit then, you can even take your family, all paid by the university.” Especially California and Washington are doing everything in their power to recruit the most talented rowers.

Bart Roovers, who – at the age of 19 – almost rowed at the Olympic Games in the lightweight four, made a different choice and went to a university highly regarded for their study Physics. That meant rowing at a lower level. “For me, the most important thing is to have a good diploma when I finish university. But I also I had good feeling about the coach here at Pennsylvania. That’s paying off now, we’re winning races we didn’t win before.”

Competition
According to all there is a big difference in training mentality compared to the Netherlands. “Everything is way bigger and that is quite motivating”, says Roovers who used to train with a small team in Leiden. Van Doorn adds that another benefit of a large group is that there’s more competition. “We are continuously switching boats. Every training is a competition and you really have to push yourself. Physically you become hardened. In the Netherlands nobody trains at 5:30u in the morning, for us that’s daily routine. I never thought I would say this, but sometimes I even appreciate these sessions at sunrise.” This training regime pays off. All three of them improved their personal best time on the rowing machine with ten to fifteen seconds. Van Doorn even did it in one year.

Both Van Doorn and Roovers praise the professional way of coaching in America. Not only within rowing but also in their studies. “There’s always a mentor available who can help with planning lectures and exams and as an athlete you have priority when enrolling classes. And there’s a gigantic dining-hall where we can have dinner immediately after training sessions. That’s impossible in Holland. Our Dutch coach, Willem Jan de Widt, tries to do it in the run up to the World Under 23 Championships as well. But there is no team to help him”, says Roovers.

Collective
Hurkmans mentions another difference. “Everything we do is about the team, the collective. In the Netherlands coaching is much more individual focused with more focus on technique and with a lot more finesse. I’ve never heard a Dutch junior coach telling me that I had to push harder. They assume that you already push yourself to the limit and that you don’t need the encouragement. That might be a good thing but still I believe I got mentally stronger in the States.” The rower thinks that the combination of both styles is perfect. “Holland is the perfect place to improve your rowing technique and I’m not afraid to lose that when I’m back in the States. Our coach is very pragmatic, he loves it when my technique improved over the summer.”

The Netherlands
Despite the fact that the rowers only finish their American season end of June, they can still combine it with their ambitions to row for the Dutch Rowing Federation. Hurkmans is even selected for the national eight who is competing at the World Championships in Plovdiv. “I’m very lucky that the Dutch head coach supports my decision. He even came by this winter to see how we train in the States.” Roovers and Van Doorn were chosen for the U23-eight, despite the fact they had missed some selection races. “That was a windfall. I could have accepted if I wasn’t selected. I definitely want to grow to the international top, but I still have plenty of time left to go to the Olympics when I’m back from four yours of studying.  We’re still very young”, says van Doorn.  Rovers nods in agreement.