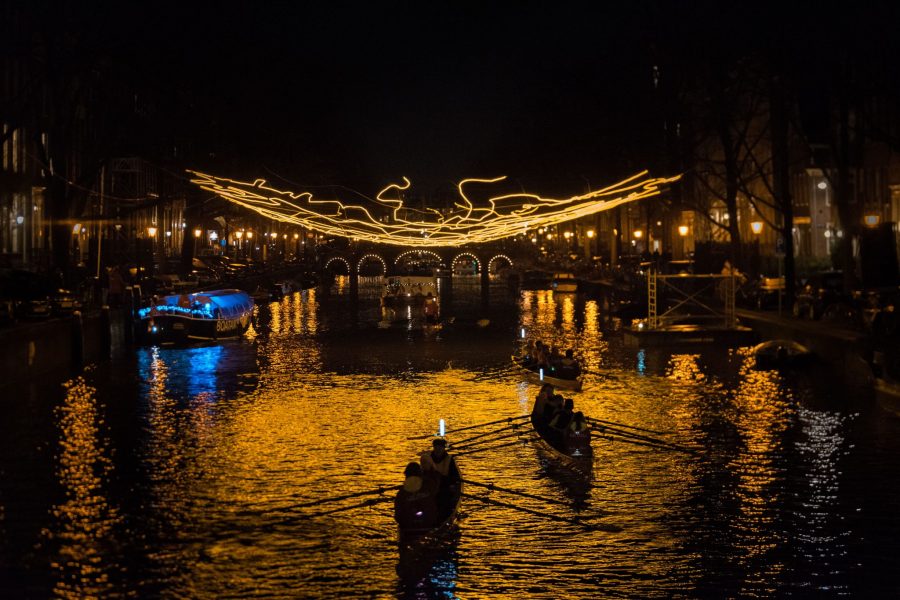 This year rowing centre Berlagebrug organizes the Amsterdam Light-festival tour for the fifth time. Every edition more than 1000 rowers have participated. TopRow spoke with one of the participants, Marie-Jeanne Diederen (51), from the Maastricht Watersport Club (MWC).

How did you become familiar with the Light-festival tour?
“I only started rowing five years ago because of my son who really enjoyed it. Not long after I started, this trip was offered via MWC ‘s Touring Activities Committee. I just got my license, so it was super exciting to suddenly row on the narrow Amsterdam canals. Our rowing location on the Maas gives plenty of challenges with the current, but it is a completely different dynamic. I thought it was a fantastic experience and it made such a big impression that I returned every year since. Meanwhile, I organize it myself within the club.”

How do you organize the trip?
“Partly because we obviously have to come from far away, we really make a trip out of it. We leave early in the morning so that we can be in Amsterdam at noon. Then they split up into groups for different activities. Especially for us it starts half an hour earlier than normal, so we can still eat together before we go back to Maastricht afterwards. The first time I went, we were with 20 people.
Now the number increased to 40, this is the limit though.  It has been fully booked within half an hour registration was opened. This year we even had 70 applicants. This is enormous on a membership number of 400 – of which 100 are active. People are very enthusiastic about it and recommend the trip to others. Even now we had something between ten to twelve beginners. I share the boats and mix everything together. Young and old. From race rowers, to beginners and other enthusiastic members.”

How did the trip this year compared to previous times?
“It is always a bit different every year. The first time remains the best, because of the combination of the artworks and the fact that it was new and exciting. Last year’s edition wasn’t; it came across as chaotic. This edition, the artworks were significantly more beautiful again. One of the highlights were twenty enlarged illuminated fluffs that dangled above the canal. I also liked the ‘Stars of Van Gogh’. This involved an artificial version of the starry sky that Vincent van Gogh once painted for the famous painting ‘The Starry Night’. The artists try to remind us that we no longer see such a thing – especially in a city like Amsterdam where the night air is permanently polluted.”

How does the collaboration with the Rowing Centre go?
“That went very well. Each boat is accompanied by a coxswain who knows the route, including the ins and outs of the artworks. It is also important that there is good manoeuvring, because it is quite busy on the water between the large tour boats. That always goes well. Of course, some are more enthusiastic than the other. For the first time, I was lucky enough to meet someone who pointed out the beautiful book called ‘The Boys in the Boat’. You have to have that luck. However I would recommend it to anyone. I now know friends from other clubs that also come every year.”